Members of Metro DC DSA voted overwhelmingly to endorse Gabriel Acevero for re-election to the Maryland House of Delegates, District 39; Zachary Parker for DC Council, Ward 5; and Max Socol for Maryland State Senate, District 18. All of these candidates are running the types of campaigns that will position them to lead in the fight for social and economic justice in our region.

Additionally, our chapter voted to support DC Initiative 82. This ballot initiative eliminates the subminimum wage in DC by 2027 and is critical to address the unacceptable exploitation, financial instability, and gender and racial pay disparities experienced by tipped workers.

Each of these campaigns is also facing strong opposition from corporations and lobbying groups. But with your help, we know socialist candidates and initiatives with an organized, people-powered movement behind them can win. Sign up to volunteer with DSA here and check our calendar for upcoming events.

Endorsement is a distinction MDCDSA takes very seriously and to that end our process is very selective. Though this means we do not have a candidate we endorse in most races, the REDBUG voter guide is available here to give you an idea of where DC candidates stand relative to issues important to our cause. 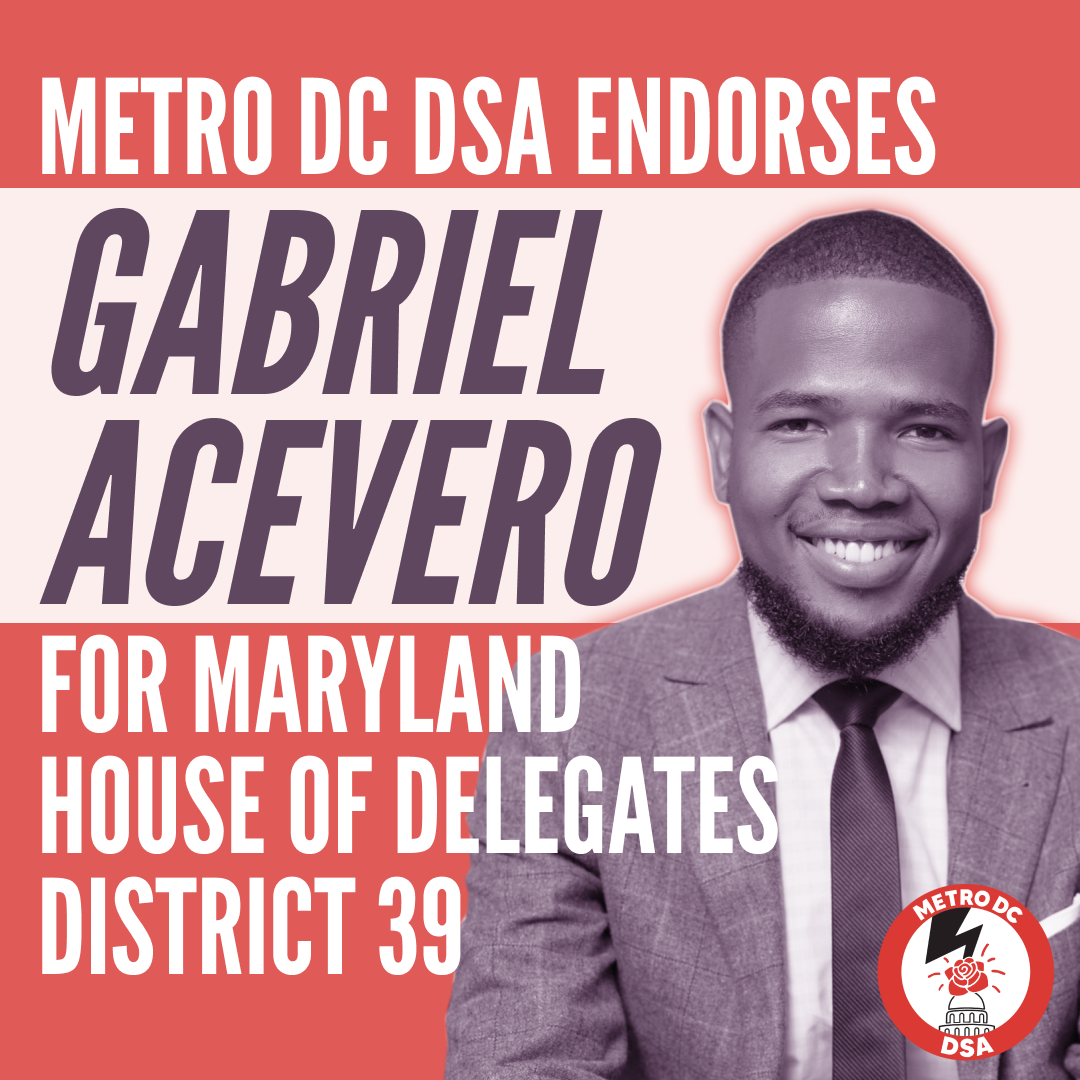 Del. Gabriel Acevero was first elected to the Maryland House of Delegates with DSA’s support in 2018. Since taking office, Acevero has been an unapologetic champion for justice and working class power and a dedicated MDC DSA comrade. Each year in the General Assembly, he routinely championed Anton’s Law, which sought to roll back protections for police officers who have been accused of misconduct. Because of Acevero’s efforts and the work of policing reform advocates, that law went into effect October 2021. 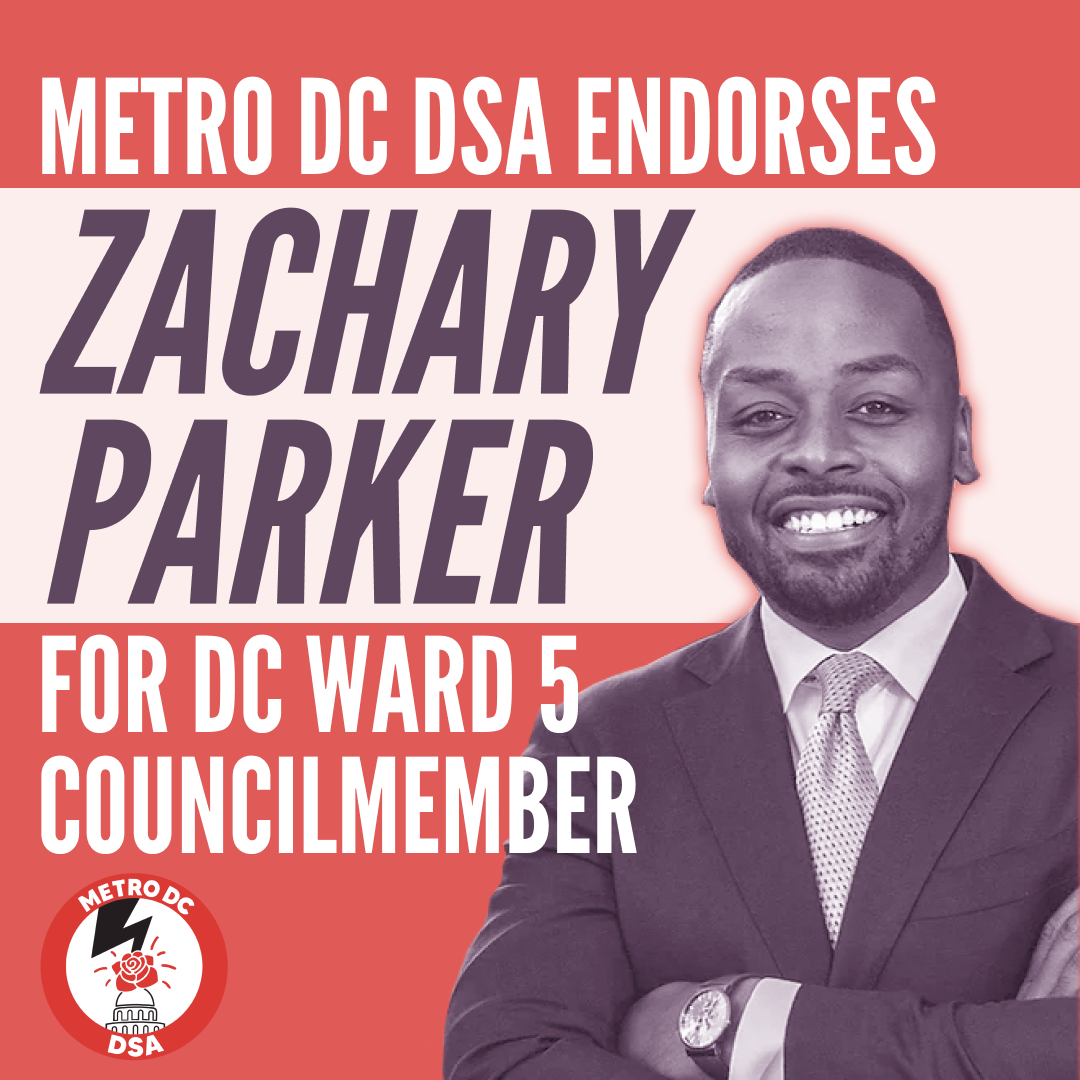 Zachary Parker is running on an explicitly people-first platform that includes expanding and strengthening rent control, affordable housing and other tenant protections; addressing the legacy of environmental racism and committing to climate justice across the district; and supporting violence prevention and community safety efforts, not by increasing funding to the police but by meaningfully addressing people’s needs. He was elected to the DC State Board of Education in 2018 to represent Ward 5. Parker’s campaign for the DC Council presents a massive opportunity for the progressive left to elect an uncompromising champion for our values and to shift the balance of power on the council to a veto-proof progressive majority. 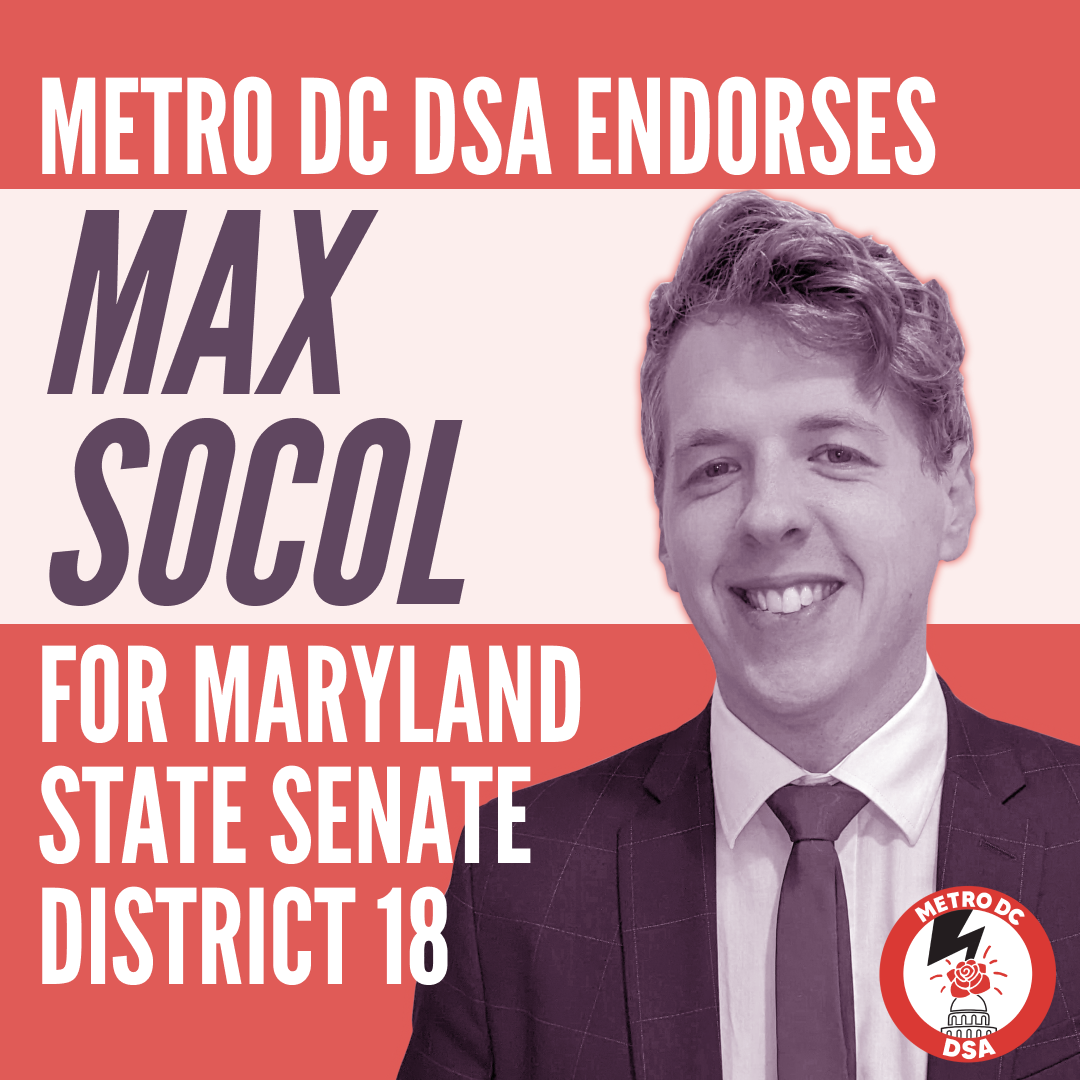 Max Socol is a long-time Metro DC DSA member with an extensive record of organizing for social and economic justice. He is challenging incumbent Sen. Jeff Waldstreicher, who voted with Republicans to water down the repeal of the Law Enforcement Officer Bill of Rights during the 2021 session of the Maryland General Assembly. Waldstreicher has also opposed LGBTQ protections, progressive taxation and building the Purple Line. Socol is running on a platform calling for statewide rent control, ending medical debt, a permanent millionaire’s tax and more.

Metro DC DSA is a democratic, member-led organization. This means that members have the opportunity to review, debate, discuss, and vote on any candidate as part of an extensive endorsement process.

All applications for endorsements are sent to our chapter’s elected Steering Committee, which works with the Political Engagement Committee to coordinate our endorsement process. Members of the chapter are then informed that our chapter has received an application for endorsement. A formal resolution to endorse must then be moved at a subsequent monthly membership meeting by at least five chapter members in good standing. The body will have an opportunity to consider and debate the resolution before the end of the voting period of the next scheduled general body meeting. During this time in between monthly membership meetings—typically about 30 days—chapter members will have multiple opportunities to engage with candidates through recorded question-and-answer conference calls hosted by the Political Engagement Committee.

All candidate responses during the endorsement process, except those including personal contact information, will be made publicly available on this website.

Any candidate interested in an endorsement from our DSA chapter, or any chapter member interested in sponsoring a resolution, is strongly encouraged to review the Metro DC DSA Endorsement Handbook. A summarized version of all endorsement steps can be found below.

Candidates who wish to apply for an endorsement can start the endorsement process by filling out our chapter’s candidate questionnaire.

For school board elections we have a separate questionnaire with more specific questions.

Endorsement materials submitted during the 2022 primary endorsement cycle (voted on at December 2021 Local Convention) can be found here.

Endorsement materials submitted during the 2022 general election endorsement cycle (to be voted on after the September GBM) can be found here.

Each year, the Metro DC DSA Steering Committee is responsible for setting two monthly membership meetings as the designated meetings during which our DSA chapter will debate on electoral endorsements. These monthly all-chapter meetings (known as general body meetings) are followed by an online vote of all members to decide whether the chapter will approve an endorsement.

The two Metro DC DSA endorsement meetings for the 2022 election cycle are listed in the table below. Associated deadlines are also in the table. This table will be updated with more precise dates as we get closer to each election.

History of Our Electoral Program

Our endorsements aren’t just a recommendation to our members to vote for a particular candidate, but a commitment to fight to get that candidate elected. We organize canvases, phone banks, text banking, poll coverage, press releases, rallies, and more to help our endorsed candidates win.